The following document has general information relating to the minimum and reasonable specifications and configurations that are required to run Incisive applications on your network.  New hardware and technologies are always emerging so you should adjust the recommendations in the following document to allow for them.

Call the Incisive Helpdesk if you have any specific queries.

As a method of improving the security of the Incisive inCLOUD system, an additional layer of protection has been included during the connection process, which requires the end-user to authenticate the connection from their mobile phone.

The authentication process involves an app, called Authpoint, installed on the phone, which can be used to either:

Training videos are available to step you through how to configure the Authpoint app and also the options to authenticate the connection.

Error connecting to Database at startup

Occasionally a message may appear when you go to start SPM saying that the database could not be found, or there is no database connection or perhaps even the message just says timeout-expired.

There are a number of problems that can cause this to occur.

If you are having a problem with the inTOUCH app, you can kill, quit, stop or close it by:

iPhone 13 or newer (without Home button)

iPhone 12 or earlier (with Home button)

It's possible that password was incorrect.  Either try again or use the 'Forgot Password' option on the login screen to reset the password.  It will send an email to the email login address that is registered and you will need to use the link in the email to reset and enter the new password.

If it's still not working, check that the email address you are using for the login is exactly the same as the email in your Operator settings in the Incisive SPM/PHM application.

Because of the targeting of healthcare systems and the need to further protect the Incisive inCLOUD servers from unwanted intrusion, we have applied a restriction that requires your ISP to use the NZ range of IP addresses.

If you are connecting from outside of NZ or are using an ISP that is providing you with a non-NZ IP address, you will either need to get the ISP to provide you with a static IP (which we will add to the white-list) of use a VPN with a server based in New Zealand.

The VPN we recommend is NordVPN.

Test and Optimise your Wi-Fi connection to your router.

To test and produce a technical report of your Wireless network (wLAN) run the following command at an administrative COmmand Prompt: netsh wlan show wlanreport

Use the article in the following article to check that the wi-fi connection from your laptop or device is optimally configured for the router you are connecting to.

For Mac laptops, press the Options key and click on the WiFi symbol in the top Titlebar then select 'Open WiFi Diagnostics'.

If you are experiencing drop-offs or losing connections to your remote server there are several things you can try.

The following information relates to editing the rdp file.

There is a setting in the .rdp file that can improve the latency of the connection.  If you edit the rdp file with Notepad, find the line saying "ConnectionType" and change the value to a  3  so that the line will look like "ConnectionType:i:3".

This value effectively tells the rdp connection to be more forgiving (better latency) if there is no response from your router or the remote server and to have more retries.

Testing connection to server and port

You can use Powershell command to check that you are able to get a connection to a server and a port.  Telnet can also be used but the Telnet Client is no longer installed by default.

This test is useful to determine whether a workstation is able to connect to a remote SQL Server and Port.  It can't test the port if you are using the SQL Browser application to browse Dynamic ports. 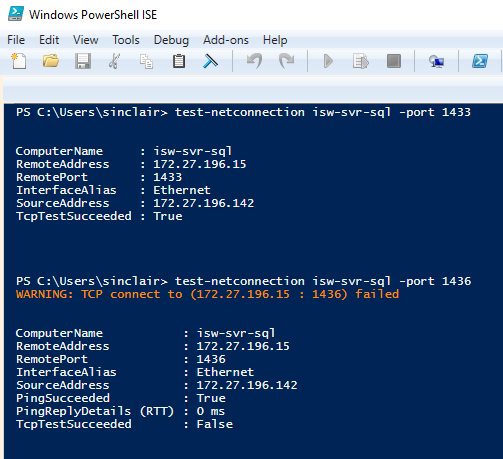 Some Programs cannot access network locations when UAC is enabled

You are not able to use a Mapped Drive (S:\...) as it is too dependant on the Operators network login also having the same mapped drive settings.

We suggest that your contact your hardware technician to get them to troubleshoot the issue.
Function Keys not working
Many clients are experiencing issues with their function keys when trying to work remotely.  In most instances this is because there is an Fn key on the keyboard and this needs to be used in conjunction with the Function keys.
Below is a short article on what this key is, where to find it, and what it does.
Fn

Short for Function, Fn is a key found on most laptop keyboards and some desktop computer keyboards. The Fn key performs special functions, such as adjusting the screen's brightness and speaker volume.